A closer look, 5 facts you may not know:

Termite colonies have undertaker workers to manage and dispose of dead colony members. This task is very important for overall colony health as well as nutrient recycling.

What did we learn from this study?

If the termite was “freshly” dead

Dead, fresh worker termites were collected from the test area, brought back to the colony and cannibalized

Why do termites cannibalize workers and soldiers?

Worker termites that had been dead for more than 64 hours

Solider termites were “walled off” AND buried

Why Should a PMP care about undertaking Termites?

FACT #2 Colonies can be founded in different ways 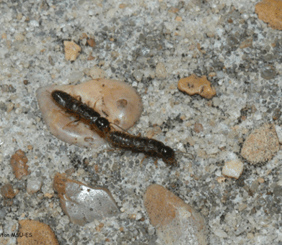 The king & queen pair up, shed their wings, and create a nest chamber for their first batch of 6-12 eggs. The queen will care for this first batch until they can take over as workers to tend to colony care needs.

We often believe swarming is the only way termites create new colonies. Are there other ways termites can create “new” separate colonies? New colony formation can also occur if a portion of the termites in a colony is separated from the rest of the colony, resulting in the formation of sub-colonies. This is termed as colony “splitting” or “budding”. What types of events can lead to this behavior? Colony Founding, and how does this information help a PMP? Understanding how colonies are founded and created can help us understand colony elimination if there are several colonies on a property.

Termites and Division of Labor:

Termites are Eusocial and have a caste system. Castes have specialized morphologies, based on their specialized tasks. Diverse, sometimes very large nests. Castes are generally divided into 2 types of termites.

The fertile termites include:

The non-fertile termites include:

How is caste determined?

Classically, assuming that all egg contains the similar or identical genetic information, caste developmental fates are determined depending on various environmental factors experienced during postembryonic development, as well as sex and egg factors.

Termites as a Superorganism:

How does this help a PMP? By understanding basic biology and how termites behave we better understand how to manage them…  know they enemy!

FACT # 4 Termites can eat a lot 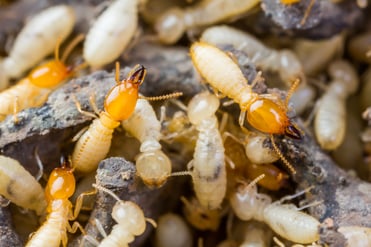 How much wood CAN a termite eat?

The average Formosan termite colony will be about twice these estimates.

So how much wood is that?

So, if a termite colony eats NO OTHER FOOD sources. An average native subterranean termite could consume a 2 X 4 X10 in one year, and a Formosan colony could do it in half that time.

Both of these organisms share similar habitats and are critical for the decomposition of wood. Association between these organisms brought some interesting evolutionary consequences. For example, some fungi species form fungal masses that mimic termite eggs which act opportunistically to access & steal termite colony resources.

These termite balls are held in the egg chambers…

The enzymes produced by the fungal balls are also found in salivary secretions of termites.

The overlap of these organisms in the decomposer group AND sharing similar chemicals to break down cellulose led to the origin of termite egg mimicry.

How does this information help a PMP? Termites are complex creatures with complex relationships. Understanding basic biology and not so basic behavior will make you better as a PMP.

FACT #4–Based on 1998 NPCA report authored by Dr. Barbara Thorne, "Biology of Subterranean Termites of the Genus Reticulitermes,"

Is It An Ant or a Termite?

Why Do Termite Treatments Fail?

How To Prepare Your Golf Greens for Fall