A Closer Look at Fall Invaders 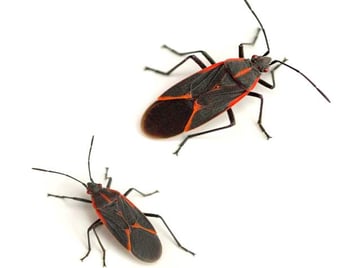 Winter brings many things like frigid temps and unfortunately, also uninvited guests that move indoors in search of a warm area to shelter. Fall pests begin their invasions as days grow shorter and nights become colder.

Insects like boxelder bugs and lady beetles (also called “ladybird beetles” or “lady bugs”) can become a problem for homeowners. Boxelder bugs are about ½ inch long and are black with red marks on their backs.  Lady beetles are round, approximately ¼ - ⅜ inch in diameter.  The best-known species have a red body covered with black dots, but they come in other colors including yellow, orange or scarlet.

The big invasion months are usually September through winter in some parts of the U.S.  Their ideal overwintering temperature is between 40 to 50°F - which just happens to be the temperature in the wall voids of a house.  It’s common to see them on the sunny southern or western sides of your home, looking for a way into wall voids.

Stink bugs are another common fall invader that can cause concern due to their smell. Stink bugs emit a distinct odor from their scent glands when disturbed, which will likely happen if you try to remove them from a structure. Be aware that a vacuum can become smelly if used to suck up stink bugs and it may be better to swat them into a container for disposal if there are only a few. Lady bugs can also be problematic during removal, because they will stain surfaces like walls if squished. Thus, be careful when vacuuming or using a broom to remove lady bugs to limit squishing and staining.

The best defense is a good offense

The best defense against fall invaders is to keep them out in the first place. These insects can fit into a crack the thickness of a credit card, so an opening does not have to be large. Make sure screening and weather stripping are in good shape and do not have openings or gaps. Check areas where they could enter around doors, windows, plumbing penetrations, vents etc. and appropriately seal or caulk openings.

Why Are German Cockroaches So Successful

How to eliminate annual bluegrass weevils

END_OF_DOCUMENT_TOKEN_TO_BE_REPLACED

A Closer Look at Bed Bugs

A Closer Look with Brittany Campbell

Introducing NEW TEKKO Fly G, a new way to prevent emergence of adult flies  House flies and stable flies are two of the most economically important pests in cattle and...