How to Control Wasps, Hornets and Yellow Jackets

Every year in spring, queen wasps re-emerge from their overwintering sites to seek new places to build a new colony. The ideal nesting location is inaccessible to predators, protected from exposure, and close to food and building materials. Around midsummer, wasp colonies have reached peak population. Hundreds to thousands of workers inhabit a nest and spend all day hunting down food to feed their young. Wasps do not become more active during summer; simply put, there are just a lot more of them buzzing around.

By the end of summer wasp colonies can number into the thousands. Then, in late summer, after social wasps become extremely numerous and aggressive, food becomes scarce. The last group of offspring they raise will become next year’s queens – the future of the colony – so they act to protect this future generation. Once they have completed their life cycle, strong, healthy females leave the colony to mate and prepare to overwinter as an inseminated queen. 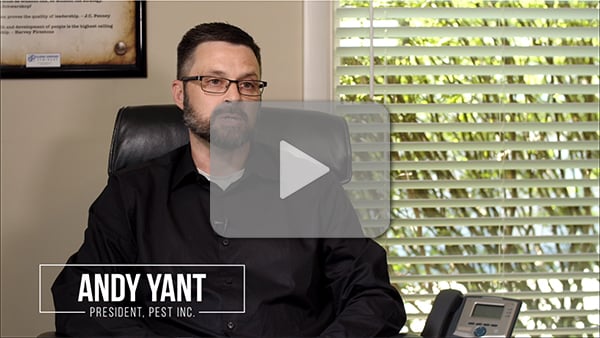 Insects in the order Hymenoptera are of concern due to their ability to sting, and in some cases a single insect can sting multiple times. When these insects sting a person (or pet), they inject venom into the victim. Venom is a complicated chemical. It varies significantly in composition based on the type of insect. In general, most wasp venom contains enzymes to break up cell membranes and immobilize prey, alarm pheromones to notify nearby nestmates of a threat, histamines that cause pain and itching, and serotonin that enhances the pain experience of the victim.

The complex nature of wasp venom means the “cure” your grandmother told you about (put a little baking soda on it), will most likely not help. The most effective tact would be to use anti-histamines to inhibit inflammation.

Get Control of Stinging Pests >>

PMPs are most often called to manage wasps in the family Vespidae. This family is in the Order Hymenoptera and includes wasps, hornets, paper wasps, potter wasps and yellow jackets. This is the most common group of social wasps and the most likely to sting humans.  These wasps typically build their nests from either mud or plant fibers that resemble paper. Customers should know that removing the nests of wasps is not safe. Colonies normally only live one year, and most of the members of the colony die when cold winter temperatures arrive. They are known to be effective pollinators of plants and some are important predators of many pest insects.  Like ants and termites, wasps rely on trophallaxis, or the sharing of food, between members of the colony. In the colony, the queen and the workers are closely related, often sisters, and the colony members have significant genetic similarity to the queen and her eggs.

There are many species of yellowjackets in the US and they can be identified by the variety of black and yellow markings found on their abdomen. Yellow jackets are carnivores, feeding mostly on insects, spiders and other protein sources to provide nutrients to developing larvae in their colony. Yellowjackets nest in 2 ways, aerially like paper wasps or in underground nests.  As spring goes to summer, they grow their populations and their diet changes to include more sugars/carbohydrates instead of protein sources. In summer and early fall, as natural food and water sources become scarce, they turn to scavenging, and that's when we’ll find them lurking around garbage cans and interrupting your customers picnics, pool time, or backyard relaxation time. A few yellow jackets here and there are a nuisance, but a nest of them in a customer’s yard can pose a real hazard. They can aggressively defend their nests from any intruders and will attack, pursuing the threat for long distances. Yellow jackets are also capable of stinging multiple times.

Paper wasps, typically considered insects in the genus Polistes, are widespearead in the US, with 15-20 species found here. These wasps build open, umbrella-shaped nests, made of a paper looking material; this is also where they get their name. These nests are often found suspended from eaves, on window casings, under decks, or in attic spaces. They are sometimes found in shrubs/foliage and even on the underside of playground equipment. Paper wasps come in a variety of colors and patterns and are distinguished from yellow jackets by their larger size. Their bodies range in color from reddish-orange to black in color, often with yellow highlights. These wasps average about 3/4-inch-long and have long legs compared to their bodies. If a nest is disturbed, there is a high probability you will get stung. Paper wasps are typically non-aggressive in nature and are considered to be beneficial as they prey on many insect species.

Hornets are about ¾ inch long and are typically covered with black with yellow or white markings. Bald-faced hornets, which are about 3/4 of an inch long with a black body and gray bands are famous for their massive, enclosed nests which can be seen hanging from tree branches, eaves or other sturdy perches. Hornet colonies usually contain more than 100 wasps. These beneficial wasps are currently found from the eastern seaboard west to the eastern Dakotas and south all the way south to New Orleans. 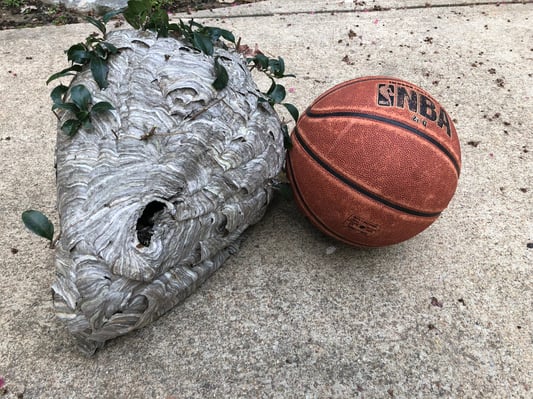 So, what’s a PMP to do when wasps are more active and property owners are threatened?

When small nests are noticed, especially if they are nearby to where people and pets are common, they should be treated and knocked down as soon as possible. If the colony is ignored and allowed to grow, the chances of developing an aggressive colony increases as time goes by.

To treat a colony or nest, utilize Stryker Wasp & Hornet Killer. This powerful aerosol allows the applicator to stand back up to 20 feet away from the nest and eliminates it on contact. Wasps will drop off the nest on the ground immediately, with no chance to release any alarm pheromone. This quick kill feature decreases the chances of being stung. Once all the wasps are off the nest(S), knock the nest down and dispose of it to discourage re-colonization of the same area.

READ MORE: "How to knock 'em dead on the first shot", applying aerosols and gaining you happier customers and hopefully more referrals.

Whatever stinging pests you may be tackling for customers, these pesky insects don’t stand a chance against CSI’s new family of Pressurized Solutions.

Do You Work Outdoors?