The Only Strategy You Need For Zika Virus Season

Mosquito borne disease is a real threat in modern America. By providing mosquito management, Pest Management Professionals play a key role in serving and protecting the public health, your customers and yourself, not just from annoying and sometimes painful bites, but from mosquito borne illness.

One of the newest, and most concerning is the Zika virus. Imported cases existed in nearly every one of the lower 48 states, but there have been very few locally transmitted cases of Zika virus in the USA. Incidence of this virus is spreading and can potentially be a serious medical issue.

Until recently, Zika virus was an obscure virus, confined to equatorial Africa and Asia, and known only to specialists in tropical medicine. It was first identified in 1947, when scientists studying yellow fever virus in the Zika Forest of Uganda stumbled on a previously unknown virus in a feverish rhesus monkey. However, it wasn’t until 1958 that it was shown Zika virus is primarily spread by the feeding activity of the Aedes mosquito. Zika is now a known threat in the U.S. with many confirmed cases.

Typically, symptoms of Zika are somewhat mild, and similar to the flu as well as other mosquito borne illnesses such as yellow fever or dengue. Some of the most common symptoms are an itchy red rash, fever headache, joint/muscle pains, and inflamed eyes, followed by recovery within 2-7 days. So, if infection with Zika virus is usually mild… why all the fuss?

There are a couple of uncommon, but severe complications that make this virus unusually dangerous.  One of the uncommon, but possible risks of infection with Zika virus is the development of Guillain Barré syndrome, an autoimmune disease that attacks the myelin lining of our nerve cells. It is a rare complication, but nevertheless a threat to public health.

The most serious concern related to the Zika virus is the virus’ effect on unborn children. If a pregnant woman is infected, the virus can be passed to her developing child, causing severe birth defects, including brain defects and microcephaly. As of today, there is no vaccine or medication to prevent Zika virus infection.

Ensure your customers are protected from mosquito borne illnesses

Spring is a good time to assess areas around a home that could attract or harbor breeding mosquitos. The first, and arguably most important step is to remove larval breeding sites. Standing water is the priority (puddles, old tires, children's pools, even pet water dishes). It's also a good time to check that screens are intact and properly installed. Inform your customers that wearing long sleeves and long pants are also bite deterrents. 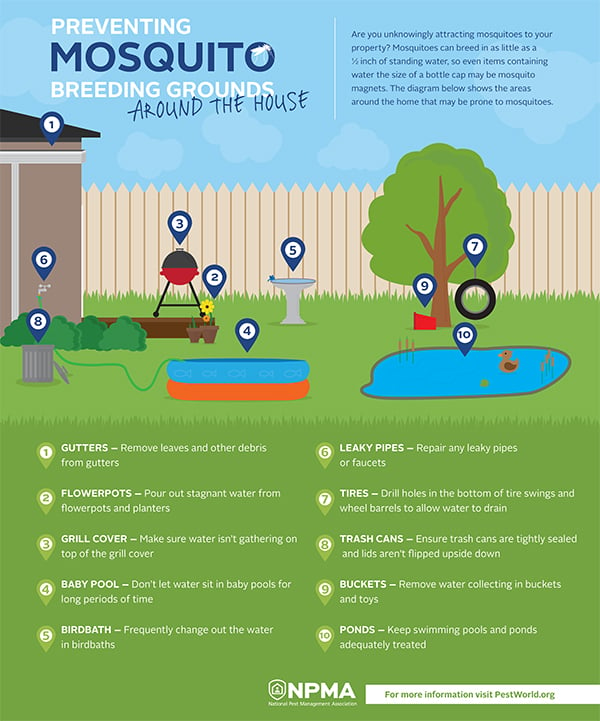 When treating your customer’s space, a trusted adulticide should be used. An important addition to any barrier treatment should be an insect growth regulator or IGR.

Utilize an IGR in your barrier applications. IGRs like TEKKO Pro in combination with CYZMIC CS provide long-lasting benefits for mosquito management. (Don’t forget to take advantage of the CYZMIC CS and TEKKO Pro Guaranteed 60-Day protection plan). We as professionals know larvae can be affected by very little product, lengthening the reach of your application and reducing the overall numbers of flying adults.  Additionally, the only strategy needed to battle Zika virus may be using a Combination Chemistry® product such as PROFLEX, PMPs can use a single product, know they are mixing correctly and extend the life of their treatments. The ultimate goal here is to reduce the number of applications that are necessary and avoid those CALL BACKS. A great way to reduce those CALL-BACKS is with the PROFLEX 90-Day protection plan, going on now! Lastly don’t be afraid to try something new, it can be the difference between a life-long customer or a one time callout. 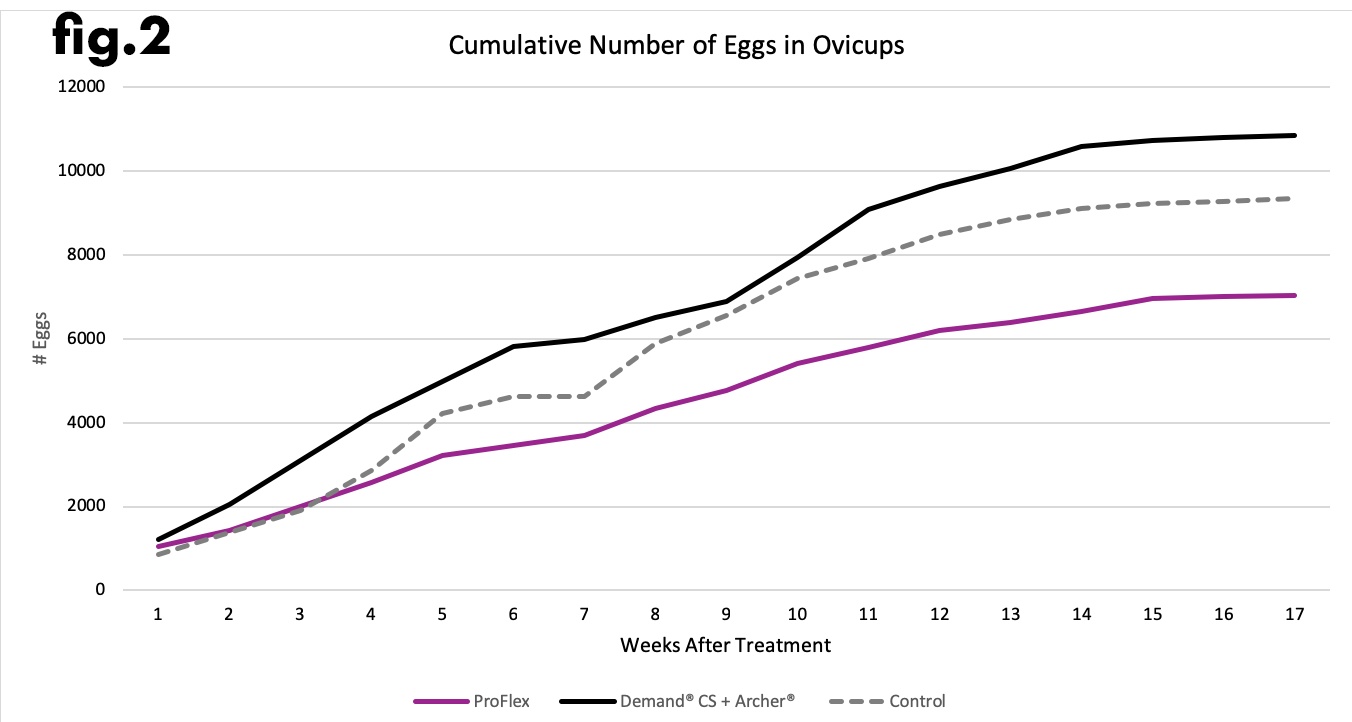 Fig.2 Cumulative number of Aedes spp. eggs collected in urban backyards after a SINGLE application of Proflex or Demand + Archer. Proflex reduced the number of eggs collected in treated backyards. What this means… fewer larvae and ultimately fewer biting adults. This shows that by using Proflex we can not only control adult mosquitoes that are biting today, but also reduce the number of adults that develop tomorrow.

One more thing! If you or your customers are going to engage in outdoor activities in areas that are not treated for mosquitoes or in rural areas such as parks, insect repellent should be worn. The CDC has several recommended active ingredients that will protect you from biting mosquitoes.

If you, your family, friends or customers plan to travel anywhere there is reported cases of Zika virus, it’s important to protect yourself. The first way to protect yourself is with knowledge; knowledge of where the virus is active, where the mosquitoes that carry the virus are active and where these things exist in the same time and space.

The CDC has an updated map showing this information that is interactive – you can select the area in the world of travel and learn if there is risk. If you find that the area you plan to visit has reported Zika virus transmission, care should be taken to prevent mosquitoes from biting. The most important thing to do is wear insect repellent such as DEET, IR3535, Picaridin, or other CDC recommended repellent. Follow the directions carefully and reapply as directed.

Additionally, wear clothing that covers as much as your body as possible, such as long sleeves and long pants. Finally, prevent mosquitoes from biting while you are sleeping and choose accommodations with window screens or carry your own mosquito bed net. Prevention is the key with mosquito borne illnesses.

Why are mosquitoes considered a dangerous pest?

Mosquitoes are vectors of numerous diseases and are often described as one of the deadliest animals on earth. Some of the most common and well-known diseases transmitted by mosquitoes include Zika, West Nile virus, malaria, dengue and equine encephalitis (EEE). According to the World Health Organization (WHO), mosquito bites result in the death of more than 1 million people every year — the majority of these deaths are attributed to malaria and not in the United States.

What is Zika virus?

Zika is a disease that is spread to people primarily through the bite of an infected Aedes species mosquito. According to the CDC, Zika was first discovered in 1947, and in 1952 the first human cases of Zika were detected. Since then, outbreaks of Zika have been reported in tropical Africa, Southeast Asia, and the Pacific Islands. More recently, epidemics have spread across the Eastern Pacific and into South and Central America. There have also been reports of Zika cases across the United States.

How is Zika transmitted?

Zika virus is spread through the bite of an infected Aedes genus of mosquitoes, which is the same type of mosquito that carries dengue fever and chikungunya. Aedes aegypti, which live predominantly in tropical and sub-tropical regions, are the primary carriers of Zika. Aedes albopictus, commonly known as the Asian tiger mosquito, might also transmit the virus and is found much farther north in the summer.

What are the chances of a Zika outbreak in the United States?

While the probability of infected mosquitoes traveling to the United States is unlikely, there is reason to believe that Zika virus can spread locally. If more imported cases continue to surface, especially as the summer months near, it may result in human-to-mosquito-to-human spread of the virus in areas of the country where mosquito vectors are present. The National Pest Management Association (NPMA), Centers for Disease Control and Prevention (CDC) and other organizations are monitoring the situation closely. Please find more up-to-date information at PestWorld.org and at CDC.gov.

What are the symptoms of Zika?

For the complete information regarding Zika symptoms, diagnosis and treatment, see here from the CDC.

Does Zika have any adverse effects?

According to the WHO, there are reported potential neurological and auto-immune complications associated with Zika virus disease. Recently, local health authorities in Brazil, have reported an increase in Guillain-Barré syndrome which coincided with Zika infections in the general public, as well as an increase in babies born with microcephaly. More investigation is needed to better understand the relationship between these conditions and the Zika.

What should I do if I suspect that I have Zika?

If you start experiencing symptoms of Zika, it’s important to seek immediate medical attention, especially if you are pregnant.

What is the forecast for mosquito-borne illnesses in the future?

Unfortunately, we cannot predict future outbreaks of pest-related illnesses. But, what we do know is that mosquitoes have been on this planet for millions of years and they will continue to thrive during the warmer months.

Say Good-bye to Summertime Pests Around Your Clubhouse and Course

Control Summertime Insects Around Your Clubhouse and Course