Why Superintendents Rely On Suprado

Superintendents share why they rely on Suprado to tackle even the most difficult annual bluegrass weevil problems.

For many golf course superintendents, annual bluegrass weevil (ABWs) presents an interesting challenge. As ABW larvae feed on annual bluegrass, large areas of turf turn yellow and die, which is an eyesore on greens and fairways.

The team at Quali-Pro recognized the challenges superintendents faced and jumped into action, creating Suprado Insecticide, powered by active ingredient Novaluron. Novaluron works as a chitin synthesis inhibitor, interfering with the insect’s ability to create chitin, an important part of the exoskeleton, and causing abortive molting, killing the larvae.

Superintendents Chris Navin, Nick Baskette and Glen MacDonald all battle annual bluegrass weevil on their courses. Thanks to Quali-Pro and Suprado, all three superintendents say they now have healthier courses and happier members.

THE PROOF IS IN THE TEST PLOTS

Originally a teacher, Navin started his career in the golf course industry in 2000, at courses during summer breaks. In 2012, Navin officially left teaching and worked full time in the industry while attending the Rutgers Professional Golf Turf Management program. After graduation, he took a job as assistant superintendent at Bulle Rock Golf Course in Havre De Grace, Md. Navin left Bulle Rock at the end of 2015 and became superintendent at The Club at P.B. Dye in Ijamsville, Md., where he is in his seventh season.

Since opening in 1999, The Club at P.B. Dye has had a reputation for difficult greens, rolling hills and beautiful views. Ownership committed to restoring and renovating the golf course as Navin started. This included developing an ABW management program. Navin battled the pest for the next six years with mixed results.

“After first hearing about Suprado during the 2021 season, I started doing some research on the product and was impressed with the initial observations and data, enough so that I felt it would be a very beneficial product to purchase for our 31 acres of fairways,” Navin explains. “At a few of the seminars I attended during the fall and winter months, the discussion over this product was very exciting and left me with a pretty good handle on how and when this product would work best.”

Navin started using Suprado this spring on his 31 acres of bentgrass and poa fairways. He decided to leave a test plot in an area that historically has seen heavy ABW infestation. He was able to compare the efficacy of the product from the test plot to the rest of the treated fairways.

“After the application, we had a check plot area in one of our worst areas on the course when it comes to ABW populations and damage,” says Navin. “When we first started seeing damage to turf in this area, we continued to scout the rest of the property for any other ABW damage. After about 10 days, this was the only damage on the entire 31 acres of fairways. We pulled plug samples from our other known hot spot areas for ABW populations and found 0 larvae or pupa in these areas. We then returned to the damaged turf and found several larvae and pupae in each plug taken from that area, but as soon as we moved to treated turf a few feet away, populations dropped to 0.”

Following the drop in ABW population, Navin says members and guests noticed the changes, mentioning the course is in fantastic shape, even following a few particularly dry months this summer.

“In the past, we noticed that after stretches of dry weather with the peak sun angle of May and June, areas of Poa annua would begin to show signs of stress due to ABW damage combined with current weather conditions,” explains Navin. “The difference has been amazing.”

For fellow superintendents, Navin has a word of advice — do your homework.

“Do your research to better understand the product and how it works,” he says. “If there are any concerns, listen to the anecdotal and testimonial evidence that will be available as the summer progresses. From what I have heard as of July 1, there isn’t much — if any — disappointment and many are very impressed with the efficacy, including myself.”

BREAKING THE MOLD FOR ABW CONTROL

“When I arrived at HHCC almost 10 years ago, we were seeing huge numbers of (ABW) adults when scouting using a vacuum in early spring. Later, salt flushes on fairway plugs would sometimes see a dozen or more larvae per sample area,” Baskette explains. “Over the years, our control strategy evolved and we have achieved much better control. This year, scouting for larvae post Suprado (application), we have only identified one early instar larvae in multiple fairway samples.”

The crew at HHCC uses Suprado across all 26 acres of fairways, four acres of greens and three acres of tees. Baskette said the team is pleased with how well the product works.

“Initial reactions from the techs to Suprado have been entirely favorable, the techs are pleased with Suprado both from an ease of use/handling perspective and a pest control perspective,” says Baskette. “Last year, when I attended several educational seminars focused on Suprado, I was a bit skeptical of a product claiming near 100 percent control of any golf course pest but my observed control of ABWs to this point has been exceptional. Our members and players have noted an increase in turf quality during 2022 compared to previous years.”

Shannon Slevin, mid-Atlantic territory manager for Quali-Pro, worked closely with the team at HHCC during the initial product rollout to give Baskette’s club the best results possible. Slevin even worked with the team at HHCC to devise a strategy to best apply Suprado with different water volumes and timings of post-application irrigation, giving Baskette a hand up over ABWs.

Baskette’s advice to supers considering adding Suprado is simple: “Introduce it into your spray program on a limited acreage area such as tees and evaluate control there to see if it would be a good fit into your overall ABW management strategy. Basically, just give it a try.”

SIMPLIFY THE SEASON WITH SUPRADO

“I’ve done two applications of Suprado this year, and I’m very pleased,” MacDonald says. “We had a lot of resistance, like a lot of guys are having with other insecticides, and within the first application saw great results. If you use it right after peak adult migration, you’re going to maximize your control.”

“It’s amazing how such little insects can be catastrophic in a sense,” explains MacDonald. “In years past, I would video tape the ABWs moving to show my members what was causing the damage. This year I won’t be able to make that video after using Suprado. It’s been a game-changer for us.”

Even though MacDonald is in his first year working with Suprado, he says he has already seen great improvements on the course and anticipates club members will highly regard this product change.

“I’ll take our members out every once in a while so they can see the soap flush to better understand what we are going through,” MacDonald says. “This is our first year using Suprado but it’s going to become a staple, right now there is no resistance to it. I’m excited to see what the members notice when there isn’t any ABW damage to the course.”

MacDonald knows that it isn’t just the members who will notice a difference. He said his technicians told him how pleased they are not only with the results they’re getting but also with the ease of use. With how safe Suprado is to apply, MacDonald said PPE and respirators are not necessary, which allows the technicians to apply the product and continue working on the course. This, according to MacDonald, has made it very easy to deploy the product where needed throughout the fairways.

As the season at Cripple Creek progresses with little to no ABW damage, MacDonald has one main piece of advice for other superintendents looking to use Suprado and other Quali-Pro products: trust the research.

“Penn State, Rutgers and other great universities have done the research to vouch for the product,” MacDonald says. “That’s always one of the first things I look at with products — does it work, where was the research done and who is using it. Quali-Pro has done a great job providing the research so we have it. With all the data available, it’s a no-brainer for the end user.” 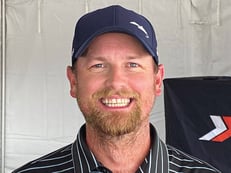 “I’ve found Suprado to be an absolute game changer in my ABW control. I applied Suprado at peak adult activity this spring and again at the beginning of the second generation of adults and have witnessed phenomenal results. Suprado provided me, hands-down, the best ABW control I’ve had in 12 years as a superintendent. Thanks to Suprado, ABW damage was nonexistent.”