When fall arrives, it’s easy to focus on the natural beauty and crisp air that accompanies the season. Unfortunately, it’s also the time of year when wasps are especially active.

PMPs are most often called to manage wasps in the family Vespidae. This family in the Order Hymenoptera and includes hornets, paper wasps, potter wasps and yellow jackets. This is the most common group of social wasps and the most likely to sting humans.  These wasps typically build their nests from either mud or plant fibers that resemble paper. Colonies normally only live one year, and most of the members of the colony die when cold winter temperatures arrive. They are known to be effective pollinators of plants and some are important predators of many pest insects.  Like ants and termites, wasps rely on trophallaxis, or the sharing of food, between members of the colony. In the colony, the queen and the workers are closely related, often sisters, and the colony members have significant genetic similarity to the queen and her eggs.

Normally, wasps feed on small insects. However, in the fall, wasps develop a craving for sweets; sugar sweetened sodas, juice, candy, and other items you are likely to find at an outdoor party become highly attractive. This means more wasps attracted to where people, and especially children are congregating.

During the spring and summer, wasps are busy too, but during that time of year they are typically busy building and defending their nests to become much of a nuisance.  By the end of summer their colonies can number into the thousands. Then, in late summer, after social wasps become extremely numerous and aggressive, food becomes scarce. The last group of offspring they raise will become next year’s queens – the future of the colony – so they act to protect this future generation. Once they have completed their life cycle, strong, healthy females leave the colony to mate and prepare to overwinter as an inseminated queen.

So, what’s a PMP to do in the fall when wasps are more active and property owners are threatened? Keep your arsenal well stocked of course! Consider investing in a quality bee suit to protect you from these stinging insects. Check under playground equipment, under eaves, soffits, and other areas where nests might be located. Always be on the lookout for ground ne 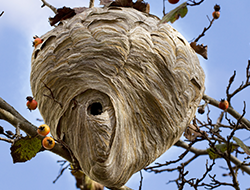 For any wasp call, consider carrying several cans of Stryker Wasp & Hornet Killer to use on nests you know are threatening an area. New from CSI, Stryker Wasp & Hornet Killer is a premier product for quick knock down of wasps. With a ~20 foot spray distance, coupled with a tight, controlled spray pattern, one can should easily treat 2-3 average sized nests. Additionally, the can won’t lose spray pressure until it is completely empty, allowing all the product to be used in each can.


Don’t let wasps ruin your enjoyment of the outdoors this fall. Knock ‘em dead with Stryker!

END_OF_DOCUMENT_TOKEN_TO_BE_REPLACED

How To Prevent Flea Bites

A proactive approach to getting control of fleas The warmer weather means flea season is still here and will linger for a few more months. It’s always smart to take...